Chancellor | Chairman, Board of Trustees 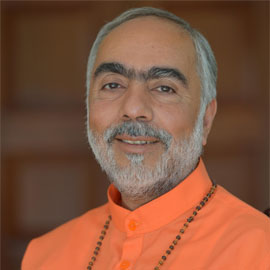 Pujya Swami Swaroopananda, Chancellor of Chinmaya Vishwa Vidyapeeth, is the Global Head of Chinmaya Mission and leads over 300 Chinmaya Trusts worldwide, all doing tremendous work to spread the universal wisdom of Vedanta. He is Chair of Chinmaya International Residential School (CIRS), which under his leadership, is ranked as the No. 1 and No. 2 co-ed boarding school in Tamil Nadu and all of India, respectively. He has been featured in India’s leading newspapers and has spoken at prestigious institutions around the world – including on TV and radio platforms.

Before being bestowed the privilege to serve as Global Head by Pujya Guruji Swami Tejomayananda, Swami Swaroopananda was the Regional Head of Chinmaya Mission Australasia, United Kingdom, Middle East, Africa and the Far East. During this time each centre escalated its reach, scale and innovativeness, inspiring thousands across the world with essential self-development philosophy.

Swami Swaroopananda is a rare voice that blends authenticity with accessibility; theory with self-practice; logic with heart. He is a master orator who has envisioned and conducted numerous spiritual management seminars, by far the most popular being Make It Happen™ – a powerful programme designed to reveal each individual’s unique purpose and empower them to discover success, significance and fulfilment in all aspects of life. The immense impact of his courses has led to an array of global workshops for both youth and executives of major corporates. His courses have also been adapted and used as leadership development programs at various organisations.

His warmth, compassion and ability to deeply connect with all make Swami Swaroopananda a pioneer in bringing the universal knowledge of oneness to a variety of audiences. This comes across clearly in his range of books which include the spiritual classics, Ik Onkar, Maha Mrityunjaya Mantra, Inner Ramayana and Sankat Mochan along with many contemporary gems such as Simplicity and Meditation, Avatar, Life Management Techniques, Journey into Health, and the recent global bestseller Storm to Perform.

For close to three decades Swami Swaroopananda has worked tirelessly to fulfil Chinmaya Mission’s goal of giving maximum happiness to maximum people for maximum time. He has made a transformational impact on thousands of lives across the world and garnered himself a place among the vanguards of self-development philosophy.