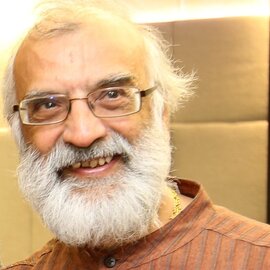 Dr. Ramesh Pattni is a psychologist and a Hindu theologian whose research is at the intersection of these traditions. He has a deep interest in presenting the psychological concepts, tools and techniques of the ancient traditions in today’s world for psychological well-being. He obtained a doctorate from the University of Oxford, Faculty of Theology and Religion, based on his research into Patanjali’s text on Classical Yoga – the Yogasūtra, and Western Positive Psychology, comparing the phenomenology of Flow and altered states of consciousness experienced in the meditation of samadhi. He is considered an authority in Yoga Psychology based on the ancient text of Patanjali.

He also has three master’s degrees in psychology, psychology of religion, and study of religion. After successfully running a family business in Kenya for 23 years, he decided to go back to his passion for learning and teaching. He completed his Oxford doctorate in 2016. He is currently at the New School of Psychotherapy and Counselling/Middlesex University studying for a doctorate and works as a counsellor and psychotherapist and assists many people with mental health issues.

He tutors at the University of Oxford at both the Oxford Centre for Hindu Studies and is registered as a tutor with the Faculty of Theology and Religion. He gives public talks on Hinduism and holds regular weekly classes through the Chinmaya Mission UK.

In his spare time, he writes poetry and is a keen listener of all genres of music and plays the guitar as well. He greatly enjoys walking in the woods and parks in the company of family and friends.

For his voluntary work in interfaith relations and community services in the UK, he was bestowed an OBE in the New Year’s Honours 2020 by Her Majesty the Queen.

Certifications and Membership
Awards and Achievements

OBE from Her Majesty the Queen UK