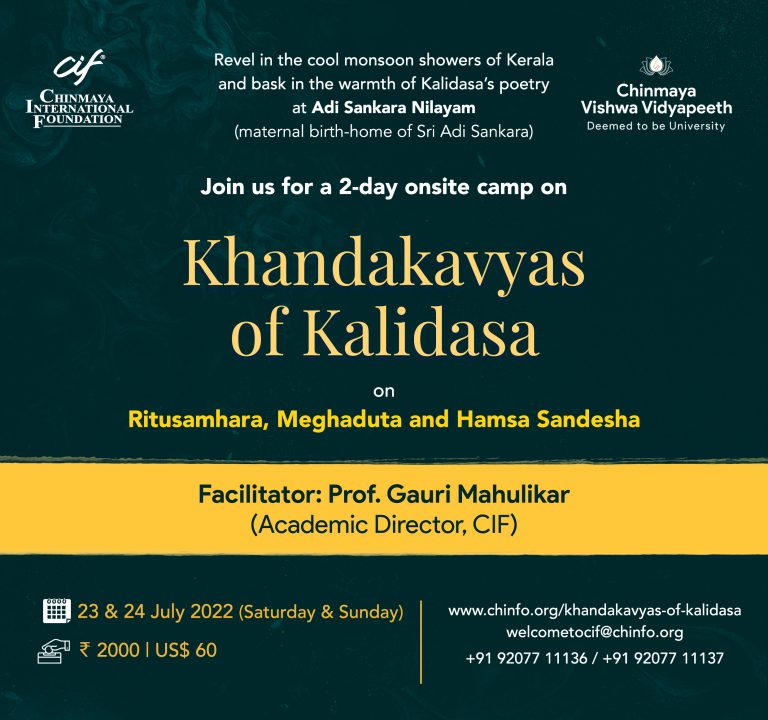 Mahakavi Kalidasa is one of the greatest poets and dramatists in the world. He composed seven masterpieces in Sanskrit. These include three dramas, two epic poems and two lyric poems. This camp will introduce his two khandakavyas (short poems): Rtusaṃhara and Meghaduta

Any individual, of any age, desirous to know about the rich Sanskrit literature by Kalidasa can join the camp. Though the khandakavyas are in Sanskrit, lectures will be in English, therefore working knowledge of English is preferred.

Prof. Gauri Mahulikar is the Academic Director at CIF.

She was Dean of faculty at Chinmaya Vishwa Vidyapeeth till August 2021. She successfully curated a popular lecture series, Open Learning for All (OLA) based on Indian Knowledge Systems (IKS) and Bharatiya Darshana Sastravali (BDS) based on Indian philosophical systems. She travelled to the USA in 2019 and gave talks on IKS at various universities and centres.

Prior to that, Prof. Mahulikar was the Gurudev Tagore Chair of Comparative Literature Professor and former Head of Department of Sanskrit at the Mumbai University.

She holds a Doctorate in Sanskrit on ‘Vedic Elements in Puranic Mantras and Rituals’. An author, who has published 8 books and over 90 research articles in English, Marathi, Hindi and Sanskrit, Prof. Mahulikar has mentored several doctoral students; eighteen of whom have successfully earned their doctorate.

She was instrumental in launching courses in Manuscriptology, Bhakti Literature and Mysticism in the Sanskrit Department and has coordinated a UGC funded project on ‘Digital Preservation of Palm Leaf Manuscripts’ (2010-2015).

Prof. Mahulikar was awarded the Maneckji Limji Gold Medal for her dissertation on ‘Ancient Greek Dramas and Bharata’s Natyasastra’ from Mumbai University. Some of the many awards that Prof. Mahulikar has been awarded are the ‘Ramakrishna Award’ by the Canadian Education Foundation, Ontario for the propagation of Sanskrit (2003); Guru Gaurav Puraskar by Kalasadan, Mumbai (2011); Kavikulaguru Kalidas Sanskrit Sadhana Puraskar by Maharashtra State Government (2013); Adi Sankaracarya Puraskar awarded by H.H. Sri Jayendra Saraswati Mahaswamigal, the Shankaracharya of Kanchi Kamakoti Peetham (2014); Savitribal Phule Puraskar by Mumbai University (2015); and the Indira Behere Puraskar by Tilak Maharashtra Vidyapeeth, Pune (2015).

Recently she was awarded the prestigious Adi Shankara Fellowship (2021-2023) by the Ministry of Culture, Government of Madhya Pradesh, for her project “Adi Shankara: Biography and Mathamnaya Tradition.”

Highlights of the camp:

Camp will be held at Adi Sankara Nilayam, the maternal birth-home of Sri Adi Sankaracharya

Expected arrival by Friday, 22 July and departure after 5:00 PM on Sunday, 24 July