‘History of the Art of Avadhana’ by Prof. Radhavallabh Tripathi ​ 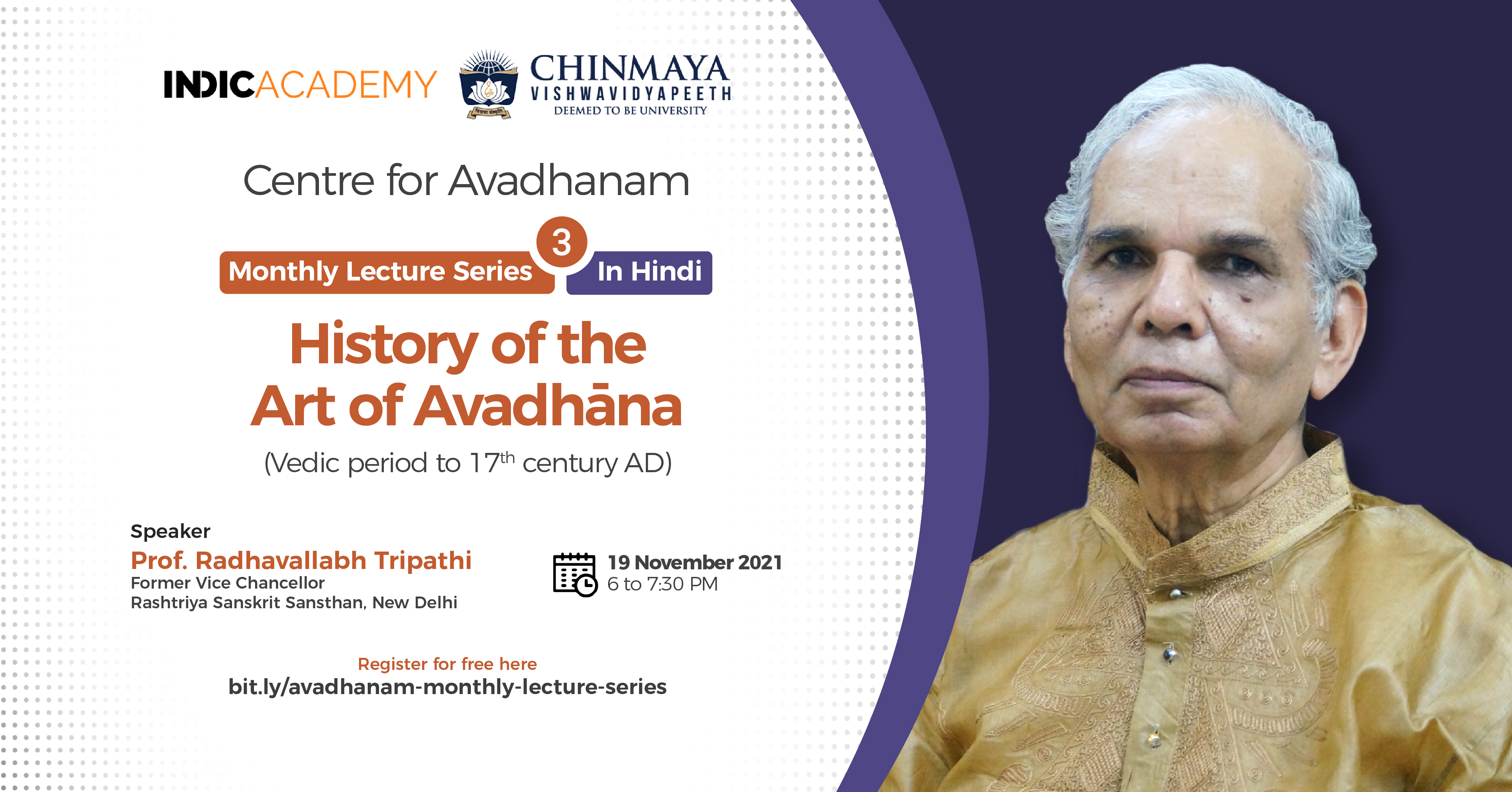 The third talk in the Monthly Lecture Series organised by Chinmaya Vishwavidyapeeth’s Centre for Avadhanam (CFA), provided an opportunity to be enriched by the rich reserve of knowledge that Prof. Radhavallabh Tripathi (former Vice-Chancellor of Rashtriya Sanskrit Sansthan, New Delhi) brings with him. He is one of the senior-most professors of Sanskrit who is also a poet and playwright, with innumerable works to his credit. The historical study of any art – a subject that is usually dismissed as dry – in this case, was dealt with in a refreshing fashion. Elaborating on the rigorous methodology of memorisation taken up by the Veda-adhyayis, for the verbatim preservation of what had been learnt orally from the guru, Prof. Tripathi presented the intricacies of the eight vikṙti-pathas and how they are a part of Vedavadhaannam. Citing catchy instances from the Puranas and Itihasas, especially focusing on the Mahabharata, he brought out the rudiments of some of the components of Avadhanam, those of which find mention in specialised texts like Lalitavistara. Since the subject was extremely vast, the speaker could not cover the period from the 6th century to the 17th century. It will be taken up on another occasion.

As a concluding remark, Prof. Tripathi mentioned that Jain and Buddhist contributions to Avadhanam are not given as much importance as they deserve. His reply to one of the questions raised by a participant underlined the many topics that need to be researched upon so that the history of the art of Avadhanam is complete.

The lecture was attended by around 40 people. Dr. Ramakrishna Pejathaya, Director, Centre for Avadhanam and Assistant Professor, Chinmaya Vishwavidyapeeth, set the stage with a welcome address and concluded the session with a vote of thanks. Dr. Mridula Aswin, Project Assistant, CFA, conducted the proceedings. 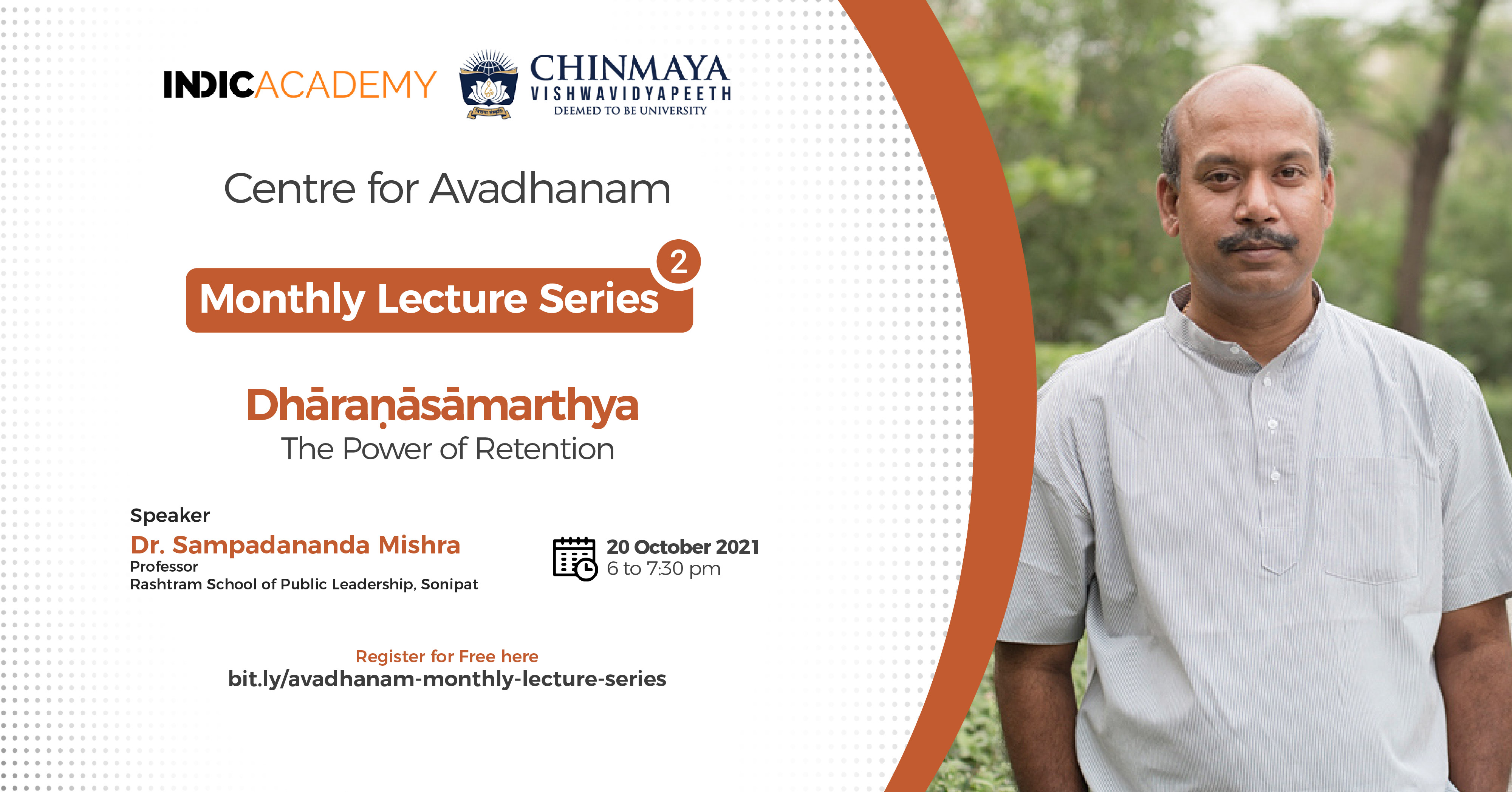 A topic of extreme importance to the performance of Avadhanam, ‘Dhāraṇāsāmarthya’ – The Power of Retention’, was the theme for the second talk in the Monthly Lecture Series conducted by the Centre for Avadhanam on 20 November 2021. The speaker was Dr. Sampadananda Mishra, a Sanskrit scholar of repute who has been contributing greatly in the fields of Sanskrit, Yoga and Philosophy. Since the subject is relevant not only to the domain of Avadhanam but also to studies of any kind that demand a satisfactory level of retentive power, the participants included those who work in the education sector, as also the field of psychology.

Dr. Mishra first gave an outline of all the intellectual faculties that should be at their working best for an Avadhani. During the course of his talk, he covered many salient aspects such as how spotless perceptive ability is a forerunner to great retention. The combined ability to retain and recall, is commonly referred to by the word ‘memory’. Another point that was a worthy takeaway from the talk was that, Dharana was not dealt with as an ability independent of other mental processes typical of modern psychological approach. Rather, it is a by-product of consistent sadhana of a spiritual seeker.

There were a number of questions raised by the participants that were answered in much detail by the speaker. Dr. Ramakrishna Pejathaya , Director of the Centre, offered the vote of thanks. The lecture was an eye-opener in many ways, and was received well by the audience. 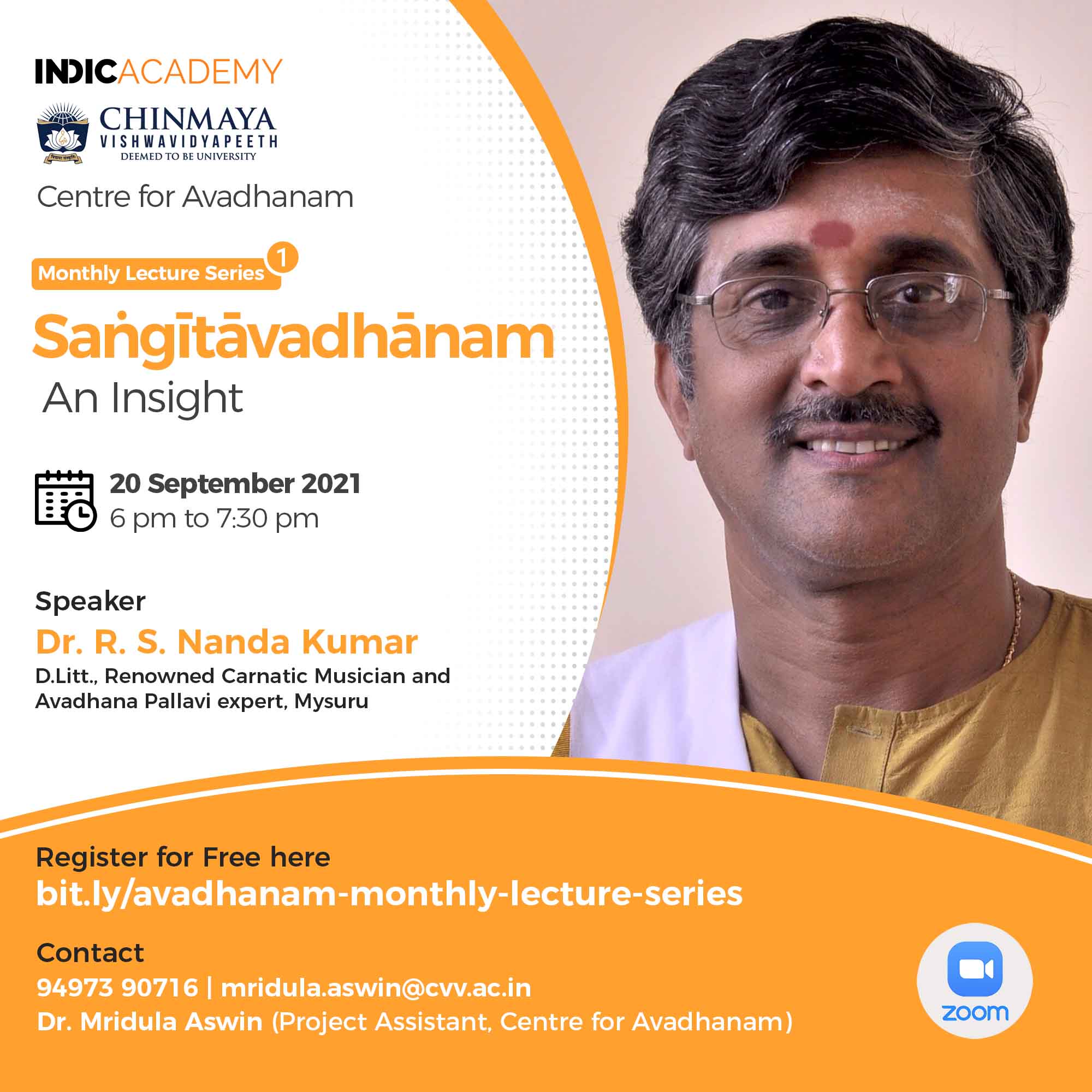 Chinmaya Vishwavidyapeth’s Centre for Avadhanam launched a series of monthly talks on specialised domains from the vast subject of Avadhanam coinciding with the poornima tithi of that month. The first  lecture in this series was delivered by musician and musicologist of international repute Dr. R. S. Nanda Kumar (Mysuru) on 20 September 2021. It was titled ‘Saṅgītāvadhānam: An Insight’.

Dr. Nanda Kumar provided a brief overview of the historical development and status of  Saṅgītāvadhānam, as discussed in the 16th century. The work of Pundarika Vittala, where the format  of Prahelika in musical performance has been divided into three components – Kuvada, Kaucata  and Avadaāna. He elaborated on each of these individually, taking up examples and  demonstrating them simultaneously. Coming to Avadhana, he spoke in detail about the various  possibilities and experimentations in tala-avadhana and also touched upon Raga-avadhana that can be done using the concept of Grahabheda. Various sources for knowing more about  Avadhana-pallavis were given by the speaker, and some segments were also played by him,  for the benefit of the audience.

In the short span of one and a half hours, Dr. Nanda Kumar did justice to all aspects of the topic at hand.  Questions that were raised by some of the participants were answered to the point, and with much clarity. On the whole, the lecture was very well received and appreciated by the audience,  who, by the end of the lecture, were eager to explore the subject further.

Register for the next lecture
PrevPreviousDr. Ramesh Pattni awarded the OBE by the Queen of England
NextRashtriya Ekta DiwasNext

Sorry, You are not authorized to view this file