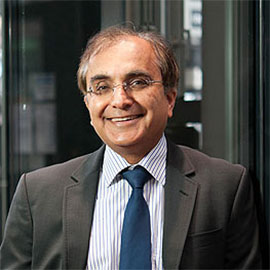 After completing his engineering degrees at IIT BHU and doctorate at Cambridge University, Prof. Kapoor joined academia. He is a world-renowned researcher and has produced over 325 papers/reports, three books, several patents and a university spin-out company.

His research work has won many prizes in the UK and Australia, and he is on the editorial board of IMechE Journal of Rail and Rapid Transit. Recently, Prof. Ajay Kapoor was rated within the top 2% of researchers in the world in his subject area. He served as Pro Vice Chancellor at Swinburne University of Technology in Australia and significantly expanded Swinburne’s international research engagement through Joint Research Centres in India, China and Malaysia. He is a Fellow of Engineers Australia and the Cambridge Commonwealth Society.

In teaching and learning, Prof. Kapoor has focussed on developing full-fledged graduates and post-graduates through industry engaged courses and by providing support to students from overseas and from different cultures. This new pedagogy won the Vice Chancellor’s prize. Prof. Ajay Kapoor’s other awards include the prestigious Sir George Julius Award by Engineers Australia (twice) and TA Stewart-Dyer-FH Trevethick award by Institute of Mechanical Engineering, UK. In the past, Prof. Kapoor has held senior appointments in the UK at Newcastle University, University of Sheffield and Leicester University. He also led the American Society for Mechanical Engineers − UK and Ireland Chapter, as Chairman. He has been on the Swinburne University Council and has been a Board Member of VCAMM, Australia.

Since the inception of Chinmaya Vishwa Vidyapeeth(CVV), he has served on the Board of Management and in March 2019 was appointed as Pro Chancellor of CVV.