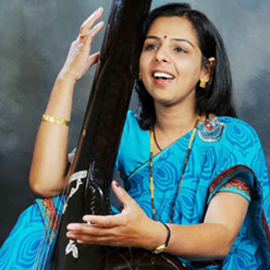 Born in Sangli (a small town in Maharashtra), known for its origin to several music maestros. Vid. Manjusha Patil’s parents identified the inborn talent and encouraged Manjusha for a career in music. She received her initial training from Pt. Chintubua Mhaiskar.

A consistent winner of numerous prestigious music competitions, she was noticed by Late Sangeetacharya Pt. D. V. Kanebua of Ichalkaranji during one such competition, which proved to be a turning point in her career. She then absorbed the authentic nuances of Agra and Gwalior Gharana in the Gurukul tradition under Pt. Kanebua. She received further training from Late Pt. Narendra Kanekar, a senior disciple of Pt. Kanebua and then also from Dr. Vikas Kashalkar.

Currently, Vid. Manjusha is honing her advanced skills under the able guidance of Padma Shri Gantapasvi Pt. Ulhas Kashalkar. Vid. Manjusha is gifted with a mellifluous voice which she has further enhanced by mastering the sustenance of swaras, aesthetic approach, creative thinking, perfection of sur and command on rhythmic aspects. With purity in the exposition of Ragas, complex patterns of ‘Taan’ rendered with speed and clarit, Vid. Manjusha is equally adept at semi-classical music like Thumri, Dadra, Abhang and Natya Sangeet. All these elements constitute her delightful performances. As a truly dedicated musician though, she is constantly in the quest of excellence through perseverance but a rich portfolio of prestigious national and international concerts and the awards bestowed on her are a clear testimony to Vid. Manjusha’s successful footsteps in the world of music.