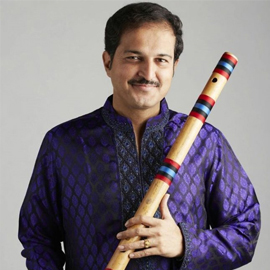 With music blown into his breath by his father, late Pt. Malhar Kulkarni, Pt. Rupak Kulkarni blossomed under the finest tutelage of the flute maestro Pt. Hariprasad Chaurasia to become an outstanding exponent of ‘Maihar Gharana’. As a ‘Ganda Bandh’ shagird (a Shishya tied in a bond of love and respect to his Guru) of Pt. Hariprasad Chaurasia since the age of 12, Pt. Kulkarni with arduous training and hard work has mastered ‘Dhrupad, Khayal and Tantrakari ang’ (styles) equally well. His recital is always a rare treat combining Dhrupad and Khayal gayaki, melodious alap and scintillating ‘Tatkar’ (tounging technique used for Jhala) innovative improvisation with mesmerising ‘Layakari’, great breath control and dexterous finger work.

At the age of 11, Pt. Kulkarni gave his first solo flute performance at Darbar Hall, Baroda. Since then, he has performed in numerous music conferences worldwide. He is a sought-after musician in the world of music. With concerts across the globe in many countries, he acquired a dignified maturity in his playing at an enviably early age. His concert at the ‘Asian Super Flautist Festival’ in Japan, is particularly a memorable one. In India too, Pt. Kulkarni has performed at almost all prestigious music conferences. He has worked with renowned music directors from Bollywood, lending his musical prowess to many chartbuster melodies. Films such as Kabhi Khushi Kabhi Gam (K3G), Fiza, Mr. and Mrs. Iyer etc. have him playing in not just the main songs but also in the background scores, arousing emotions varying from pathos to exuberance. Pt. Kulkarni has collaborated with many renowned musicians from the West to create scintillating music.