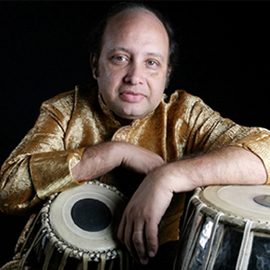 Pandit Abhijit Banerjee is one of the most sought-after creative artists in the realm of Indian classical music. He has crafted a unique style and creative approach, bringing him many accolades and awards. He is known for his sensitivity, skill and deep sense of musicality. Apart from his contribution to Indian music, he has delved into a diverse variety of world music crossover as both a performer and composer. He was steered towards the tabla at the age of four by his father. Later he also studied vocal music and violin, making him a complete musician.

He is one of the main disciples of the illustrious guru, late Pt. Gyan Prakash Ghosh. Pt. Banerjee has accompanied nearly all the top-ranking stars of Hindustani classical music on the tabla. As a tabla soloist, he has also left his distinct mark through numerous performances and publications in India and abroad. He has toured all over the world extensively and has performed in all of the major classical music festivals in India, too.

In addition to a highly successful career in Indian Classical music, his crossover work includes collaborations with international musicians. He has also produced Rabindranath Tagore’s AMI Chitrangada in collaboration with Balinese Gamelan Artiste Dewa aBerata of Cudamani group, which was later released as a music album. Pt. Banerjee founded his ensemble Tarang performing his original compositions. He has scored music for TV serials, documentaries, puppet shows, dramas and short films, and has won the National Award for Documentary Music for the film about Calcutta ‘The Trail’, which screened at international film festivals.

Pt. Banerjee has founded and established the Dhwani Academy of Percussion in Los Angeles and Kolkata attracting talented students from around the world. He has conducted several workshops and educational performance seminars on the intricacies of Indian music in universities and cultural centres abroad.