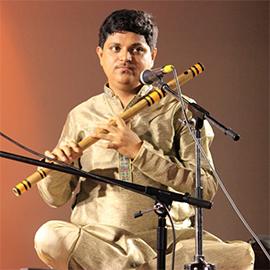 With his passion and instinct for the non-percussion instrument, Bansuri—the flute—Shri Jayateerth Kulkarni’s skill flowered under the able guidance of Kirana Gharana’s Ustad Shaikh Abdullah Khaji, the renowned flautist who is the disciple of Vidushi Gangubai Hangal. Under the sitar maestro Ustad Shafique Khan from Dharwad, he learnt the tantrakari and gatkari. He also took lessons in the Carnatic taal system from Vidwan Jayachandra Kulur.

This budding ‘Kirana Gharana’ flautist was born in Gulbarga (North Karnataka) and started learning to play the flute at the age of 19. He became a Senior in Hindustani Classical Flute from the Karnataka Secondary Education Board in 2013. Shri Jayateerth Kulkarni is an acclaimed ‘A’ Grade artiste of Akashwani and Doordarshan in the category of Hindustani Classical Flute.

He performs solo in ‘Gayaki Anga’ in Hindustani Classical and has participated in jugalbandi concerts with other instruments such as Sitar, Violin and Harmonium. Composing, assisting and playing for light music and fusion concerts are some of his accomplishments. He has performed at a concert organised by the INFOSYS Foundation and Bharatiya Vidya Bhavan. Performing in Muscat (Oman) has been an inspiring accomplishment for him. Besides, he has played the flute for numerous commercial recordings.

Shri Kulkarni has a Master’s in Commerce from the Gulbarga University and has worked in the corporate sector for over ten years in Finance and Accounts. But his unbridled passion and impulse for music brought him back to the world of classical music as a full-time artiste.