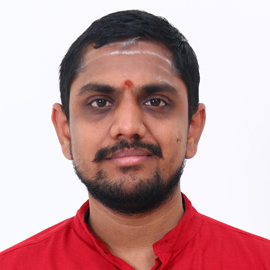 Dr. Tulasi Kumar Joshi received his Ph.D. from Banaras Hindu University, Varanasi, under the supervision of Prof. Dhananjay Kumar Pandey. He has read Advaita Vedanta and Nyaya under his Guru Acharya Shri Rajaram Shukla, the latter under the guidance of Śrī Mani Dravid Śāstrī Ji and Vyakarana in the traditional way of Kāśī under Acharya Sri. Purushottam Tripathi.

Following the completion of his Ph.D., he joined the Rashtriya Sanskrit Sansthan as Guest Faculty in Advaita Vedanta at their Guruvayoor Campus. He has delivered lectures on Vyakarana, Nyaya and Advaita Vedanta at several Vakyartha Sabhas. He has a keen interest in Yogic Philosophy. his expertise lies in epistemological and metaphysical aspects of Indian philosophy, and vyakaranam.

At Chinmaya VIshwavidyapeeth he is a Programme Director of the Integrated Master’s in Advaita Vedanta programme.

He has published 13 papers in national and international peer-reviewed journals.
Achievements