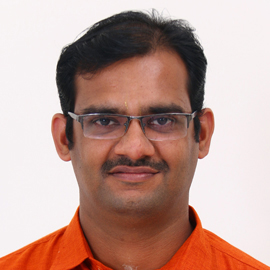 Dr. Ramakrishna Pejathaya has a doctorate from the Rashtriya Sanskrit Vidyapeetha (RSVP),  Tirupati, for his research on the medieval text on astronomy ‘Siddhāntaśekhara’ of Shripathi and its influence on later astronomers. He has been actively involved in teaching Jyotisha,  Sanskrit literature and poetics since 2007. Ramakrishna holds the Vidvat degree in Triskandha Jyotisha which he studied traditionally along with Sahitya and Siddhanta Kaumudi at SMSP Sanskrit College, Udupi. He has several research papers and books to his credit. He has also produced study material for the texts Jātakālaṅkāra, Janmapatradīpakam and Bhāskarīya Bījagaṇitam. He was a co-investigator for the encyclopaedia project Jyotiṣaviśvakoṣaḥ undertaken by SMSP Sanskrit Research Centre, Udupi.

Currently, he serves as Principal Investigator in the research project ‘Idiomatic expressions from classical Sanskrit plays’. He is on the editorial board of the research journal Prācī Prajñā.

Dr. Ramakrishna is one of few practitioners of the art of Avadhānam in Sanskrit and classical Kannada. He has performed more than 20 Aṣṭāvadhāna-s till date in different parts of country such as Udupi, Sringeri, Bengaluru, Ernakulam, Calicut, Tirupati, Somnath and Varanasi. He is a well-respected contemporary Sanskrit poet as well. His poems have been well received at national-level poets’ meets and poetic periodicals. His articles and public lectures on the various aspects of Sanskrit literature have been shared on different platforms.

At CVV he teaches courses in Sanskrit literature, poetics, Itihasas, Arthashastra and Jyotisha.