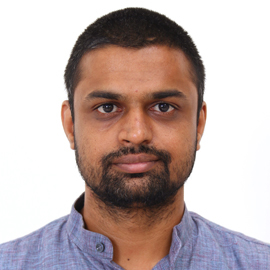 Dr. Venkata Raghavan has a Ph.D. in Philosophy from the University of Hyderabad. A software engineer who turned to Humanities, Raghavan was trained predominantly in Analytic Philosophy of the 20th Century during his Masters (Philosophy). However, for his Ph.D. work, he turned to Indian sources which addressed similar questions as those asked by contemporary philosophers in the field of metaphor research in particular and philosophy of language in general. His exposure to Western and Indian modes of thought allows him to maintain a critical eye towards both.

He is also interested in metaphilosophical issues and particularly in methodological issues in studying and teaching Indian Philosophy in current times. His broad academic aim is to make fruitful contributions to the field of comparative philosophy and philosophy of language. At Chinmaya VIshwavidyapeeth he takes courses on Philosophy, Logic, Indian Knowledge Traditions (particularly Empirical Sciences, Dharmaśāstra, Itihāsa).

Raghavan has a keen interest in Carnatic music and can play the flute, as he says ‘without causing any hearing impairment to the listener’. He has a Bullet with which he hopes to go on an extensive ‘Bullet Trip’ someday. Armed with straight-faced wit, he used to do stand-up comedy but he says he gave that up when he found out that the classroom provides more or less the same environment.