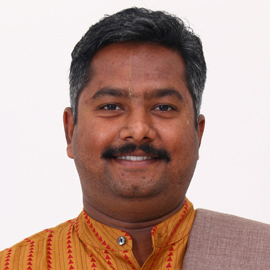 Dr. Nagendra Pavana is trained in Vyākaraṇa śāstra in both prācīnā and navya systems by renowned scholars. He has a Ph.D. in पातञ्जलमहाभाष्यस्थेषु बहुसमाधानस्थलेषु समाधानयुक्तीनां प्राबल्यदौर्बल्यविवेचनम् (Pātañjalamahābhāṣyāstheṣu bahusamādhānasthaleṣu samādhānayuktīnāṃ prābalyadaurbavivecanam) from Karnataka Samskrit University, Bengaluru. Before that he completed his M.A. (Vidwat Uttama) from the same University with the first rank, winning a gold medal.

Dr. Pavana has been teaching major works of Vyākaraṇa śāstra for the last twelve years, both formally and informally. He also has worked with Vyoma Linguistic Labs and contributed to the development of e-learning tools for various topics of Sanskrit. Along with Sanskrit grammar, his other areas of interest are Sanskrit literature, aesthetics in Sanskrit Poetry, Indian philosophy, Indian classical music, the Vedas and the Vedangas.