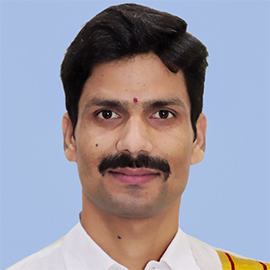 Dr. Jay Krishna Sharma has been teaching since 2015. He received his PhD from the Rashtriya Sanskrit Sansthan, Sringeri under the guidance of Prof. Dr. Chandrashekhar Bhat, Rashtriya Sanskrit Sansthan, Rajiv Gandhi Campus, Sringeri. He has a Master’s degree in Navya Vyakarana. Jay has trained in yoga from Swami Ramdev at Patanjali Yogpeeth, in Haridwar. He has directly taught yoga to over 10,000 people from all over India, in which over 100 people achieved the most amazing health benefits and found a new lease to life. While working as Project Assistant at the Sanskrit Promotion Foundation, in New Delhi, he contributed towards online Sanskrit learning by developing teaching materials and activities related to Sanskrit text books.

He can speak seven languages; and can read and write more than three scripts. He taught Sanskrit grammar for two years as Guest Assistant Professor at the Central University of Himachal Pradesh.