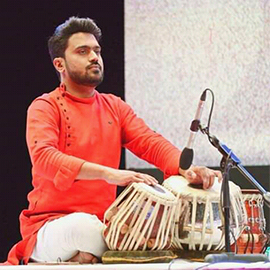 Atul Raosaheb Kamble is Assistant Professor—Tabla at Chinmaya Vishwavidyapeeth’s School of Kalayoga, at the Chinmaya Naadu Bindu Gurukula campus, Pune. He started learning the tabla at the age of 11 and for ten years learned from Late Shri Pramod Raichurkar. Later, he received extensive training from Pt. Mukesh Jadhav, from the Banaras Gharana, hailing from New Delhi. Currently, he is continuing his learning with the tabla maestro Pt. Aditya Kalyanpur of the Punjab Gharana.

Atul Kamble is an established tabla artiste in the Pune music scene. He holds a Master’s degree in music from the Lalit Kala Kendra, University of Pune and was felicitated by his Excellency Shri K. Shankar Narayanan (Ex-Governor of Maharashtra) for having received a Gold Medal in M.A.

He accompanies renowned artists including the sitar wizard Ustad Sujat Khan, Pt. Keshav Ginde, Pt. Atulkumar Upadheye, Pt. Rajendra Kandalgoankar, Pt. Mohan Darekar, Smt. Anuradha Kuber, Smt. Saniya Patankar, and so on. He has been teaching tabla privately and also at the Victorious Kidss Educares, an IB World School, in Pune, sharing his rich knowledge with his students. Besides, he performs solo as well as as an accompanying artiste, across the country. He has published many research papers. Recently he submitted his Ph.D. thesis on ‘Ustad Allarakha—An All Rounder Personality: Life and Contribution to Indian Classical Music’ at the S.R.T.M. University, in Nanded.