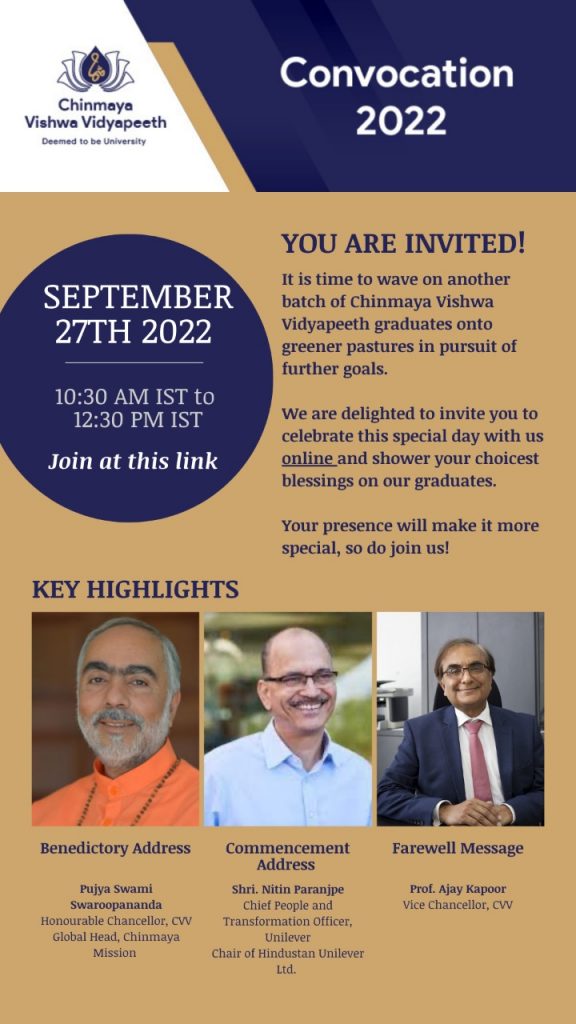 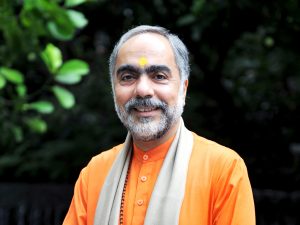 Swami Swaroopananda is the Global Head of Chinmaya Mission and in-charge of over 350 Chinmaya Trusts worldwide. He is the Chancellor of CVV and under his leadership, Chinmaya International Residential School has been ranked as the No. 1 and No. 2 co-ed boarding school in Tamil Nadu and all of India respectively. Swami Swaroopananda is a frequent speaker at prestigious universities and has envisioned and conducted numerous spiritual management seminars, by far the most popular being Make It Happen™ – which he has conducted for executives of major corporations.

Over the years he has been instrumental in escalating the reach, scale and innovativeness of Chinmaya Mission Australasia, United Kingdom, Middle East, Africa and Far East; inspiring thousands across the world with essential self-development philosophy.

In an era, rife with scepticism and confusion about matters spiritual, Swami Swaroopananda is a rare voice that blends authenticity with accessibility; theory with self- practice; logic with heart. 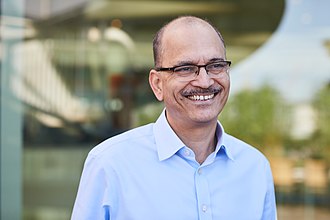 From May 2019, he was Unilever’s Chief Operating Officer and was responsible for delivering in-year results (P&L) for Unilever globally.

Prior to his role as Chief Operating Officer, Nitin was President of the Foods & Refreshment Division between 2017 and 2019, having served as President of Unilever’s Home Care Division from 2013 until 2017.

Nitin originally joined Unilever at Hindustan Lever Limited (India) in 1987 where he held various roles in marketing and sales. In 2000, he moved to Unilever London and was involved in a review of the organisation’s structure before becoming Executive Assistant to the Chair and Unilever Executive Committee.

On his return to India in 2002, Nitin held senior positions in laundry and household care, rising to Executive Director for Home & Personal Care, India (2006). In April 2008 he was appointed as Chief Executive Officer of Hindustan Unilever Limited, India and Executive Vice President for Unilever, South Asia.

Nitin holds a bachelor’s degree in Mechanical Engineering and an MBA in Marketing from Jamnalal Bajaj Institute of Management Studies (JBIM), in Mumbai, India.

For his efforts in blazing a trail for diversity, he won the GG2 Hammer Award in 2019. Previous winners were the Mayor of London, Sadiq Khan, and Chancellor of the Exchequer, Sajid Javid.  Nitin is married with two adult children. 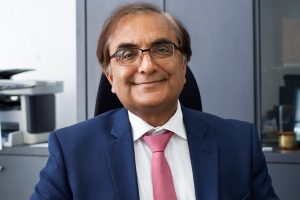 After completing his engineering degrees at IIT BHU and doctorate at Cambridge University, Prof. Kapoor joined academia. He was recently rated within the top 2% of researchers in the world in the field of Mechanical Engineering. With over 325 papers/reports, three books, several patents and a university spin-out company to his credit, Prof. Kapoor’s research work has won many awards including the prestigious Sir George Julius Award by Engineers Australia (twice) and TA Stewart-Dyer-FH Trevithick award by Institute of Mechanical Engineering, UK. He is on the editorial board of IMechE J of Rail and Rapid Transit.